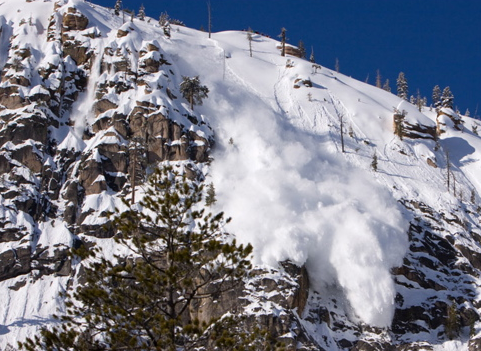 An avalanche rips down Tram Face early Monday. I’m watching from the top of the photo.

The idea of skiing the Tram Face is amazing- it’s big, it’s gnarly, and it may have the best spectating of any venue in the world. The reality of skiing tram face is, unfortunately, very difficult. It needs to snow a lot, stabilize over approximately 24 hours, all the while maintaining it’s integrity (not wet slide and pin wheel) in the hot Tahoe sun. The organizers had the ambition and it could have been a phenomenal event, but based on the snow and stability , I can’t say I was disappointed when they called off Tram Face after the slide. Although the avalanche wasnt’t the reason for the event being canceled (it was because of the hard debris piles nearly everywhere), I look at the incident as the mountain simply saying, “no guys, not today.” 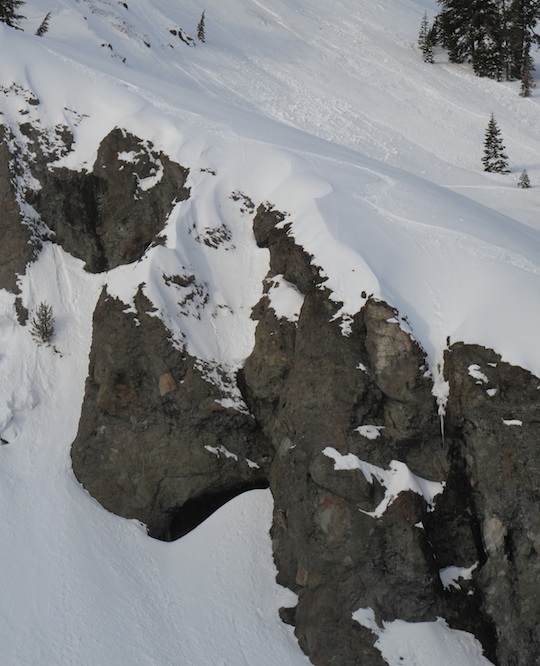 I tumbled from about a third of the way down.

So, Monday we headed to Silverado for the second year in a row. I won’t lie, I’m not a huge fan of Silverado for a big mountain competition, but we kinda had to take what we were dealt. I picked a fairly aggressive line- a standard air up top and a tight chute with a mandatory and an incredibly small transition. The air up top went fine, I dropped into the chute- that was tighter than it looked- made a hop turn and then got tip-to-tailed between two rocks. I went to make another turn and my skis stayed put and I just began tomahawking down the chute toward the mandatory. After two rolls I self arrested before I went over the edge. I sent the mandatory and skied to the finish in frustration. I’ve never crashed like that- in rocks in a place you really don’t want to be tumbling. I don’t have too many bad days on skis, but that was a pretty bad day. 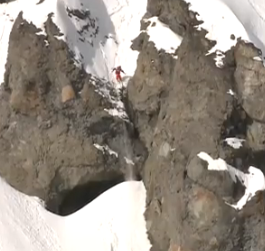 Collected myself just in time to send the mandatory.

For sure it’s a bummer that I didn’t once rise to the occasion on this years Freeride World Tour, but truth be told I’m not super worried about it. The tour gave me three years of amazing experiences traveling the world with some of the best people I’ve ever met, skiing some of the greatest mountains I’ve ever skied, and generally having the time of my life. In the end, isn’t that the point anyway?